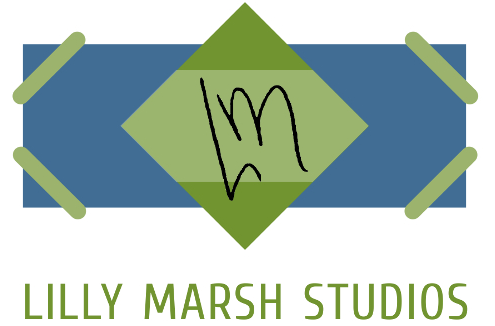 Lilly Marsh Studios uses US made AVL fly shuttle dobby looms for all production work. The three main ‘workhorses’ are ‘Fulda’, ‘Stella’ and “Ida’ and each has her specialty.

Fulda is a 16 harness Folding Mechanical Dobby Loom with a 40 inch weaving width and is primarily used for narrow projects (under 16 inches) and for sampling. Fulda lives at the dye studio at the Shirt Factory and gets a lot of use for demonstration during the Shirt Factory’s Holiday Season Open Houses in November and December.

Stella is another 16 harness Mechanical Dobby loom but is one of AVL’s Professional Dobby Loom series with a 60 inch weaving width and a four box fly shuttle system. Stella lives in the private studio and has been modified to a kick fly shuttle by a previous owner. Stella is a star at small and mid-sized warps of between 16 and 60 inches, and makes marvelous heavy blankets or soft and delicate shawls.

Lilly Marsh Studios’ commitment to environmentally sustainable production can be seen in our investment in net energy production at the main studio. The entire studio enterprise from lights to the power loom is based on solar energy production through a rooftop panel system. Connected to the national grid, the studio is a net producer of power to the grid over the course of a year. This commitment enables the studio to power a 72 inch wide power loom, and automated bobbin and beam winders, enhancing our efficiency while retaining a beneficial carbon balance.

Our secondary studio is the site of LMStudios dye and sample work, as well as offering a small public face to the studio. The Shirt Factory is a renovated sewing factory now home to a diverse community of artists, artisans, niche vendors and creative service providers. LMS is in studio 201 C, and through most of the year is a working studio for experimentation, sampling and dyeing projects. It is also a great space to meet for project consultation. During the late fall, the Shirt Factory hosts their Holiday Open Houses on Thanksgiving weekend, and then again 2 weeks later. For these events, and for selected others, LMS 201 C is converted to a public demonstration and retail space. Dobby looms, multiple harnesses and fly shuttles are unusual enough even among long time weavers, and Fulda never fails to gather a crowd of admirers.